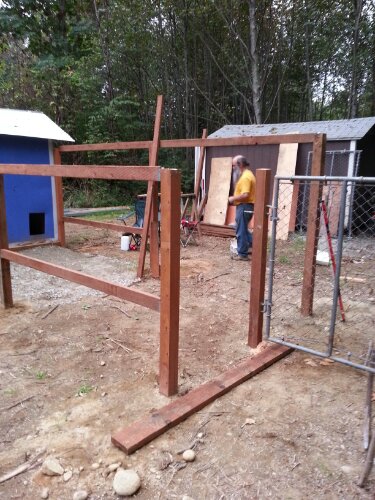 Because we have mountain lions, bobcats and bears (oh, my!) we need a secure and covered chicken run attached to the new coop so the chickens can get out for fresh air and exercise while still being protected.  We  are building one this week in the hopes that the older hens can go out into it by the end of the coming weekend.  The plan is to put a solid heavy duty plywood roof on it, and then waterproof that with metal roofing.  The sides will be heavy duty 2 x 4 mesh stock fencing with galvanized hardware cloth over that to the first supports, and a buried apron of it around the perimeter to prevent digging.  All soffits will either becovered with solid wood or hardware cloth. 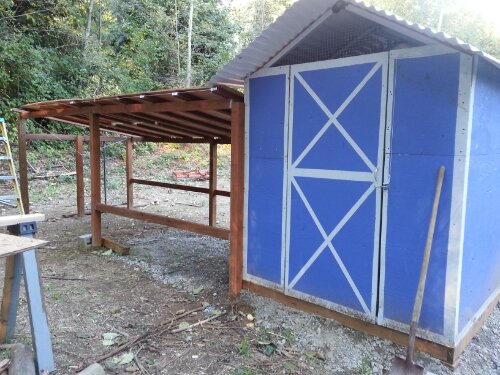 The coop already has a locking door to the outside and we are planning to cover the badly-cut door on the side with a layer of heavy plywood, then cut out a more even new door to replace it.  The eventual plan calls for an autumatic door and opener, but it may be a while before we pick one out.  In the meantime, the new laying boxes should be coming in soon and we got the parts to make an automatic watering bucket.

Well, it is apparently “baby season” here.  Today we saw another ruffed grouse – this one with a couple of really tiny fluffball chicks following her!   And later, to our delight, a doe with a brand new wobbly fawn at her side. 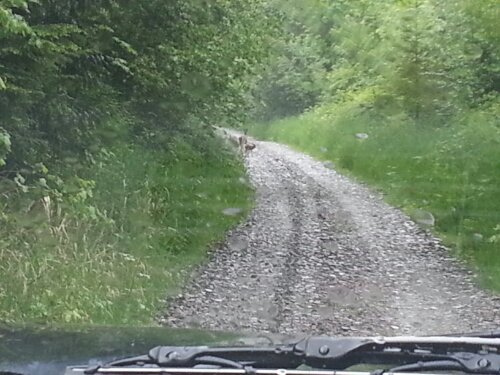 It is difficult to see them because we are so far away and it was raining, but here is a picture of the pair.  Here is another. 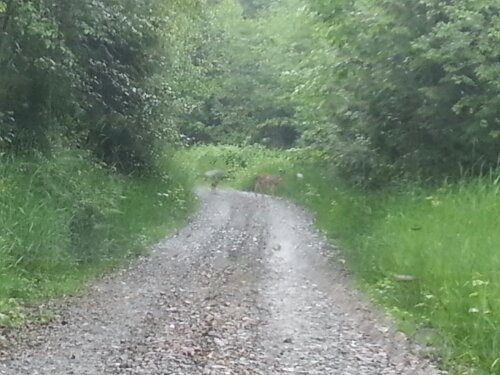 We didn’t want to frighten them too badly, so we stayed back and just let them wander their way back into the woods when they were ready.  They headed off into the area close to where the new house site will be located, which coincidentally is where the trailcam is set up.  Could this be the obviously pregnant doe we saw in the trailcam pics when we retrieved the card a couple of days ago?

We plan to check the trailcam again in another day or so.  Maybe we will see mama and baby again in the next batch of pictures!

Update:  saw a doe and fawn pair again on the road today (May 27)  It’s hard to say if it’s the same set we saw yesterday, or if it’s another duo.  There are probably a fair number of deer on the place, so I think either is just as likely.

It took a few days after we and the loggers left, but wildlife is beginning to return to certain areas of the property, it seems.  And while we haven’t seen pictures of our suspected black bear yet, we did find these beauties waiting for us! 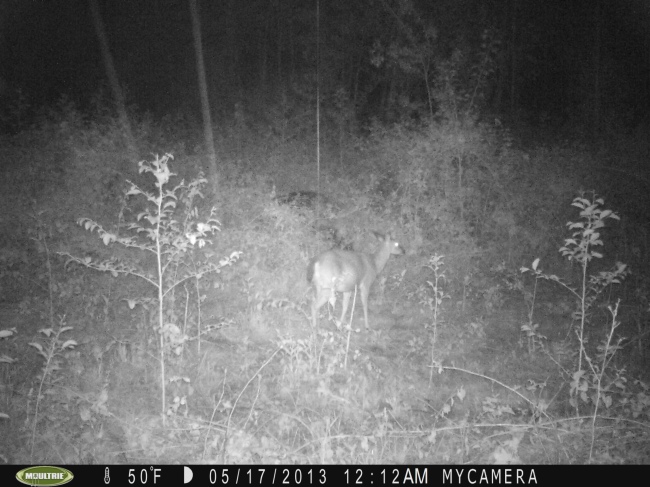 This looks to be a night picture of pregnant Columbia Blacktail doe.  I have heard from another western WA resident that the does have begun in some areas to drop their new fawns for the year.  I suspect this one may have already done so, as this picture is about a week old now. 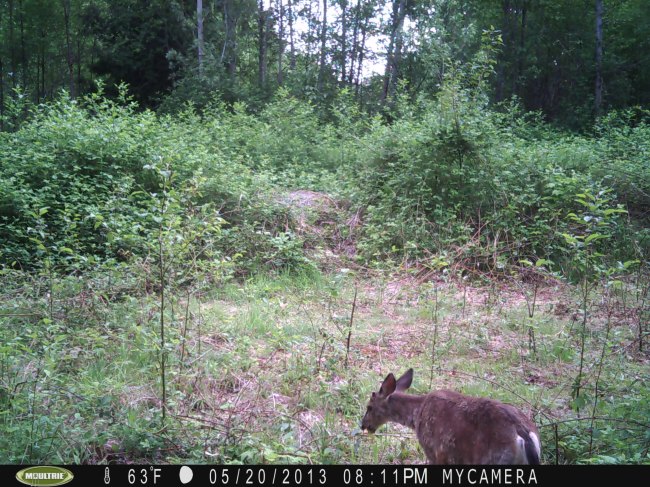 This looks to be an adult deer, feeding in the clearing where the new house will be.  This one looks to possibly be an adult male, who is just beginning to grow back his antlers for the fall breeding season.  We thought it might be the pregnant doe from the earlier night time picture, but now that we’re pretty sure those are horn buds, that kind of disproves that theory… 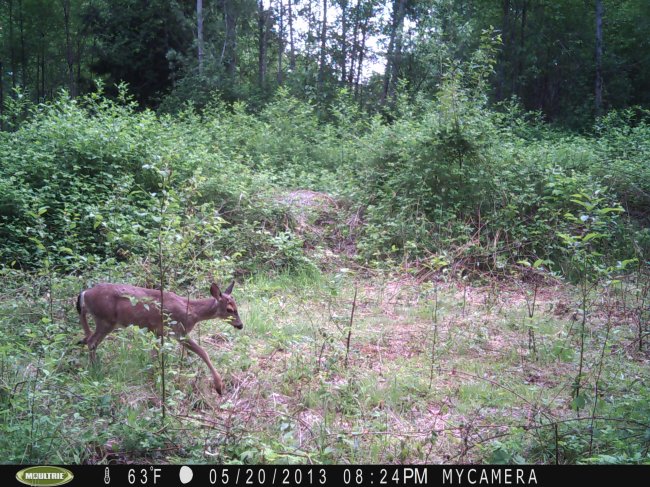 Although we are not completely sure this isn’t the same deer as in the previous photo, we think it is a different one.  It is lighter in color, and more slender.  It is, however, another buck if it is a different deer.  You can see the horn buds pretty clearly on this one. 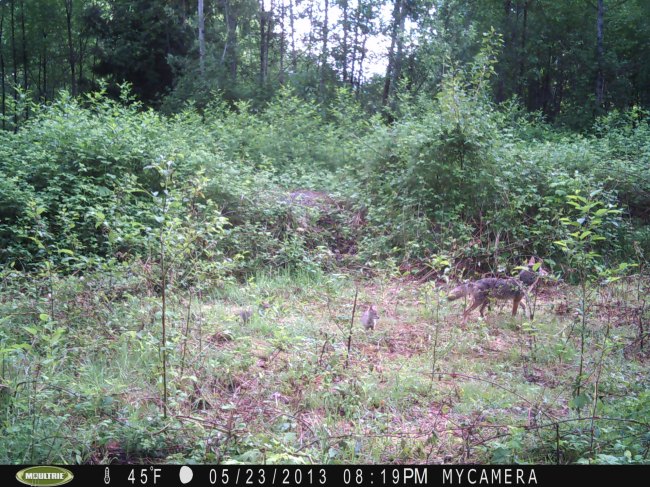 This is a picture of a mother coyote with her two pups.  This was a bit of a surprise, but we did know there were coyotes in the area, so it probably shouldn’t have been. 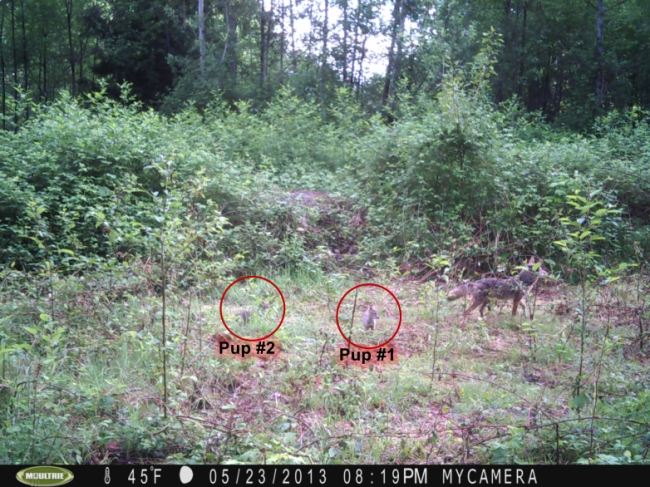 Here is the same picture with the pups circled in red, to help with spotting them both. I can hardly wait to see what we capture on the trail cam this week!